We’re sorry but that’s just not acceptable in a well managed university.

There was incredulity expressed at a packed meeting of GCU staff in Glasgow Caledonian on Monday 28th March, when visiting MSP Pauline McNeil informed staff that fact finding information that morning had revealed that the GCU Executive were at the ‘top of the queue’ on the day that the new iPad2 was launched with a decision taken ‘at the stroke of a pen’ to order 10 of the machines while redundancy and cuts hung over many of the staff.

She was part of a fact finding mission with fellow MSPs Bill Kidd and Patrick Harvie, all of whom expressed dissatisfaction with the current situation.

“I’d like to see the figures that the University are working on here. No-one seems to be willing to put forward the basis they’re working on in terms of why there need to be these cuts……I don’t think they can hide behind commercial confidentiality”

Pauline agreed adding: ” I’d like to see the figures in terms of what the gap is……. The over riding issue is accountability in this sector for the decisions that managers are taking, for the future of our universities and this institution in particular.   You don’t ask people to volunteer for a severance package at the same time as hanging something over their head – that you might be the person (unknown to you) who will be made compulsorily redundant if you don’t apply. That is wrong.”
“The fact that the executive have been issued with 10 iPad2s is sending out the wrong signal. Messages are important, people at the top on big salaries need to share the pain.
Whoever is in power after the next election needs to take on the issues of accountability of institutions of higher education to the government and to the public.
The secrecy around universities in not acceptable. It’s taxpayers’ money. The university is a public institution”

Patrick Harvie was equally critical, adding  “I wouldn’t be surprised if there’s a part of the budget stashed away for iPad3s when they appear……..” 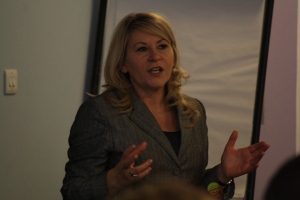 Pauline McNeil: "I would ask members of the University Court to question deeply the proposals for ninety-five potentially compulsory job losses at this university."

According to Pauline:
“It’s almost as if it’s become a job where the University is about the senior management. I can understand if you are the Principal how you would want to expand your university and make it more international. These are good aims, but I think in a recession there needs to be a proper balance. I don’t think this university is going to suffer from a lack of applications from students who want to come here. This university plays an absolutely vital role particularly in poorer communities. This is not going to change.”

“I support academic freedom but what I don’t support is the absolute freedom to make whatever management decisions you think fit, for the community and for the country. There will have to be change at the centre of that. It might be that the Trades Unions want to pitch something in here. I’m sure all the political parties will be receptive to that. I suppose we need to start talking about what we mean by accountability. What we have now is almost complete self-governance, independence, where a very small number of people at the top of these institutions are making decisions about your future and about the future of universities. I think that has to end.”

Patrick Harvie expressed disquiet with "apparent mis-management'....and a chronic lack of transparency and accountability" at some Scottish universities

Patrick continued this theme about lack of accountability in management and a ‘business’ rather than ‘academic’ mentality being adopted:

“I’m sure that most of us wish that we didn’t need to talk about changing the formal legal basis of accountability. I think part of the problem is the stance, the behaviour and the attitude of management in several institutions. The idea that they have come to think of themselves just as business leaders, as though they are the chief executive of a big company, when they should be the leaders of a community, who lead that community with the support and participation of everybody in it, including the staff and students. And if they had that attitude – that the university was a community of people who all care about providing a high quality education and being part of Scotland’s civic life, I would think that kind of leadership would mean that politicians didn’t need to start talking about changing the legislation. It’s only because we’ve not got the right attitude at the top of these organisations that we need to do that.”

Joint Union Convenor Nick McKerrell pointed out that this was week four of the campaign against compulsory redundancy:  “This is not a relaxed dinner party conversation however; excluded from this discussion is any consideration of the top level salaries within this institution.
Trade Union staff will be given forty eight hours warning of the details of the proposed cuts, and we will make our perspectives known as agreed, at the same time as the details go to staff later this week. Forty eight hours is not much time to prepare a detailed response – but the original proposal was to give us ninety minutes notice of the detail before sending it to all staff! We will do our best in the circumstances to put the view of the staff on the proposals from management.”

He reminded the meeting that the trade unions had suggested three areas to consider for alternatives to the proposed redundancies and cuts: capital expenditure; recurrent expenditure on GCU London, and executive costs.
On GCU London the trade unions estimated it costs approximately £500 to send a lecturer down to teach there, and it had been suggested that last week, when a lecturer was not able to go – the university allegedly flew four students up here for teaching, by EasyJet.

“That’s the Alice in Wonderland position we are in with GCU London at the moment.” he added. “That’s why we want the figures.”
He also indicated the incongruity of one companies currently in the spotlight for alleged tax avoidance – Top Man – having now opened up a franchise in the Saltire Centre (albeit a temporary one) apparently due to a deal linked with GCU London.

To the disquiet of the meeting the convenor also  revealed that it had been suggested to the trades unions through a series of sources (and they were having to put in a FOI request to confirm it – which was ‘disgraceful’), that in the last 3 months, our Executive (six individuals, soon to be nine with the three Executive Deans) had had agreement that their salaries were raised by twelve percent – at the same time that they were talking about ninety-five jobs being cut.
But issues such as that, the unions had been told, were ‘non-negotiable’. According to Mike Smith “The Trade Unions believe that this will save money. We believe that this is misplaced.”  Full stop

In closing, Pauline gave the following recorded message for the University Court (live link forthcoming):
“I would ask members of the University Court to question deeply the proposals for ninety-five potentially compulsory job losses at this university. Talking to staff this morning and this afternoon, it is clear that there might be alternatives to that, and I think that that’s their job – to make sure that whatever is the proposal, it is one that has as much possible support from all grades of staff in what I think is a difficult period. I believe strongly that this is the job of the Court at this time.”

This was added to by Patrick (live link forthcoming):

“The message for senior management at Glasgow Caledonian is that they have an opportunity to join with the student body and reps of the staff, through the unions, and actually to advocate for HE in Scotland…..if they’re not willing to do that, then I think they’re cutting off their nose to spite their face, and they’re going to find themselves coming under considerable pressure, both from those within the University – from the staff, who are not willing to accept the kind of imposition of this unfair and unacceptable process –  but they will also find themselves under pressure from politicians from right across the political spectrum….. There is really profound anger and concern over what is being done to HE in this country. Not just through the lack of funding….but also through apparent mis-management and certainly a chronic lack of transparency and accountability. That’s going to have to change.”

See more pictures of the MSPs consultation and the staff meeting very soon on our Flickr stream at: http://www.flickr.com/photos/caledonianunion/