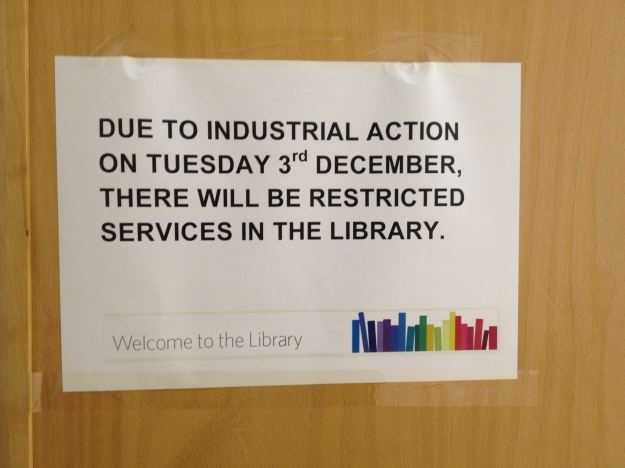 The library, along with other departments and classes were affected

Representatives of Glasgow Caledonian trade unions UCU, Unison, EIS and Unite expressed themselves as extremely heartened by the support they received from staff   on 3rd December following the failure of the UK university managements to seriously negotiate a realistic wages offer with university staff.

Having leafleted GCU students the previous day asking for support for the staff action, which was then translated into a clear drop in student attendance on the 3rd, they also received a message of support from the GCU Students Association, which was backing up a earlier on-line survey of students which had also come out in favour of the planned action. Two of the Student Association officers also attended  the Edinburgh rally held on the day of the strike.

A leaflet was issued the day before the action, asking for student support

Representing UCU Scotland at the lunchtime rally in Adelaide’s  in Bath Street,  local GCU president Douglas Chalmers called for the university management side to take their responsibility seriously and help create a properly resourced Higher Education sector where staff were treated in a professional manner, and students could be secure in knowing that they would be receiving a proper, well funded education.

Also speaking at the rally were Nick McKerrall President of EIS (also incidentally from GCU), and Unison Executive representative Davena Rankin – making up a triumvirate from Glasgow Caledonian, amongst the 5 strong speakers, with Gordon Casey from Unite and Ian Trushell bringing support from the Scottish Trades Union Congress.