Helium filled balloons supplied by UCU and bacon filled rolls supplied by Unison helped make the joint picket by university unions UCU, EIS, Unison and Unite on 6th February the most successful yet in the series of actions in favour of Fair Pay at Glasgow Caledonian.
In some ways this was the best organised of the actions so far, with posters informing the students of impending action having been put up on previous days, and a specially prepared leaflet featuring an appeal from each union given out to students on the day. 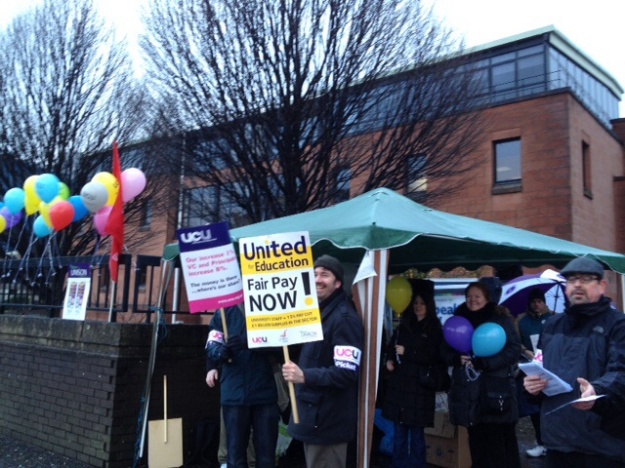 Determined to win our action

Union reps indicated more reports of alterations to and cancellations of classes than had happened at previous actions.
Even the worst of the weather stayed off, although spectacularly, mid way through the picket, the wind put an end to the gazebo which had played such a helpful role in the previous disputes!
Pickets were out on all of the main entrances to the university with several delivery vans turning away after reading our leaflet, and many passing cars honking their approval of the action.

Applause for a particularly witty point

At a brief rally at 10.45 chaired by joint Union Convenor and EIS rep Nick McKerrell, Sinead Wylie brought the greetings and support of the Students Association, followed by Unison rep Davena Rankin and UCU rep Douglas Chalmers who spoke on behalf of their unions. Nick McKerrell closed the rally, pointing out that this had been a great example of the type of joint activity that the four unions at Glasgow Caledonian continued to do together very well.
Following the rally, 100 of the helium balloons were released on a count of three to cheering before we dispersed, having shown once again the depth of feeling amongst staff that GCU should pressurise UCEA to come back to the negotiating table.

Sinead from the students association nearly carried away

PS the joint unions have already been offered another 3 gazebos to take the place of the one that lost its battle with the Glasgow weather.