National Voter Registration Day, 5th of February saw posters  put up in 100 classrooms and lecture halls at GCU giving advice to students on how to safeguard their right to vote.

In a joint campaign run between UCU and the National Union of Students, 1000 students at GCU were also given a specially printed leaflet letting them know how to check  whether they were on the updated electoral register, following changes imposed by the UK government which had led to 1 million UK citizens being removed.

“Many issues are going to be decided at the next election which will have a crucial effect on students at GCU”, said Douglas Chalmers, local branch president. “International students are already hit badly by the restrictive policies of the border agency and there are many other issues still decided in Westminster that impact on young people here. The following election at Holyrood, will of course have immediate impact on education policy so it’s important that young people are not disenfranchised by measures to restrict those who can vote. The unions at GCU will work with the Students Association and the wider ‘Bite the Ballot’ campaign to ensure that this message gets through to as many people as possible”. 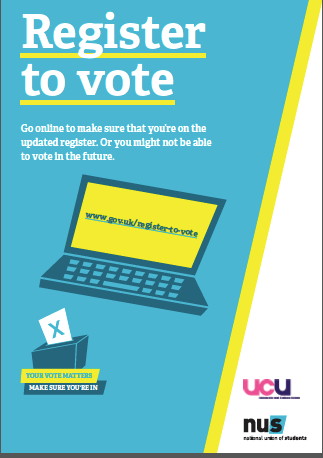