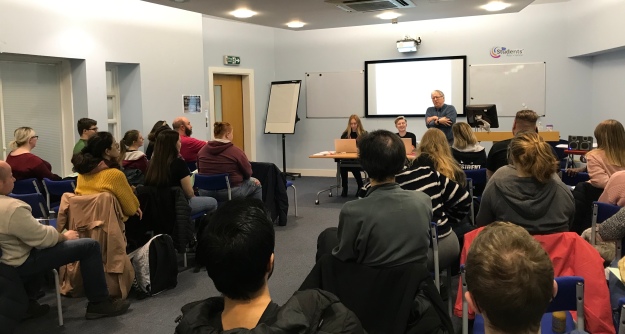 A packed meeting of GCU Student Voice discussed the impact of the current strike action on the evening of the first day with Douglas Chalmers, VP of the UCU locally and President of the UCU at UK level.

Douglas outlined the four components of the current dispute and stressed that students were not the target of this dispute – which was with the University Employer’s Association UCEA.

He talked particularly of the need to get permanent contracts for university staff, with sensible workloads, and the need to end the Gender and BAME staff pay gap.

In the discussion which dealt with some of the undoubted tricky outcomes of the dispute for students, Douglas thanked the students for their support and stressed that with a sensible approach from UCEA it would be possible to bring this action to an end quickly.

He urged students to press our university to call for UCEA to sit down for meaningful talks.

The student magazine Edit, had earlier published an on line interview with Douglas found here